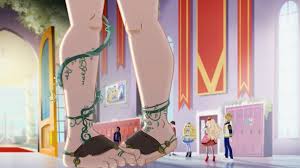 Tiny is a 2013-introduced and cartoon-only character. He is a giant, whose parents likely are the giants featured in Jack and the Beanstalk. In the destiny conflict, he is on the Rebel side for yet unrevealed reasons, putting aside his unexpected kind and timid nature as a giant.

In English, Tiny is voiced by Malcolm Danare.

Tiny is shy and soft-spoken. He appears to be well-liked by the student body and is also a skilled dancer.

Only Tiny's legs have ever been in view. He has light skin and goes barefoot, though he does wear gaiter-like constructions made of cloth and bean vines around his lower legs and feet. He is also seen wearing orange basketball shorts.

Main article: Wikipedia:Jack and the Beanstalk

Tiny appears to have a slight crush on Apple White, as he offered to carry her books for her.[1]

Retrieved from "https://ever-after-high.fandom.com/wiki/Tiny?oldid=4531"
Community content is available under CC-BY-SA unless otherwise noted.