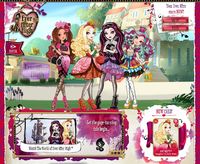 The Ever After High website[1] went live on May 30, 2013. It contains biographies of the characters, downloads, videos, games, and more. Most of these components were not added until July 16, 2013, at which date visitors were first allowed to register.

Having an account is vital to gaining the most out of the website. As a user, one is rewarded with four things for being active on the website: gold charms, gem charms, levels, and cards.

Gold charms and gem charms are the website's currency, used to buy clothes, accessories, and hair for a digital paperdoll that functions as the avatar as well as furniture and decoration for the avatar's dorm room. Gem charms are much rarer than gold charms, but they are also less often required as payment.

A special option to earn up to forty gem charms exists for those who visited the website's predecessors as well as the website itself prior to July 16. These four locations each contained a code, namely FirstDayofSchool, StartYourStory, SchoolAllowance, and Decorate. Typing out the words at the My Dorm Room page prior to picking an alliance yields ten gem charms per word.

Not everything on the website is immediately accessible. Some items to be bought for the digital paperdoll and some cards to be unlocked can only be acquired if the user is of a certain level or higher. The EAH Bookmark page has a list of activities that can be completed for level upgrades, with the values of the activities ranging from 10 to 25. A hundred points grants access to a new level.

Lastly, users can earn cards. These cards are the same ones as used on the profiles in Mirror Blogs, only the full collection covers more than just characters as topics and can be turned around to reveal extra information written on the backside. Specific cards are earned with specific activities, a list of which can be found on the EAH Bookmark page.

From Late May 2015 onwards, the Ever After High website officially closed down account making along with dorm rooms and shops. This followed the announcement that they would do so which surfaced at around Early-to-Mid May.

The Home section of the Ever After High website is, aside from a hub from which to easily access the other sections, a mood gauge. As soon as one visits the website, a question whether the visitor is a Royal or a Rebel is posed. Atop the section is a gauge that moves to the left or right depending on what the user chooses. Upon one's first visit, it is in the center, and after the user clicks either "Royal" or "Rebel", the arrow moves to that side.

The Games and Quizzes section of the website has a small but growing selection of interactive games. New ones are mainly added when key events take place in the franchise, such as Legacy Day and True Hearts Day. This means that most are themed to match those events.

The official music video for the Ever After High theme song is exclusive to the website. Users can interact with the video by clicking Royal or Rebel at various intervals. Different cutscenes are shown depending on the choice. Users can also enter their name, a friend's name, and hometown and see it in the video.

The Mirror Blogs section[23] was launched on May 30, 2013 and is a section that in turn holds three subsections: cards, profiles, and blog notes. These three subsections are repeated for each character inducted.

The EAH Bookmark[24] is a status arena for users to see what level they are on, how many achievements they have completed, view what cards they have unlocked, and other things pertaining to writing out their destiny. To a non-registered user, it displays an intro with what the site offers for game play.

The Dorm Room[25] option is another virtual game of sorts for registered users to click and customize their character's room however they see fit.  In this, they also have the option to change their outfit and appearance - plus it offers quick links to the stores, in case the user wishes to purchase new clothing and/or furniture.

The Village of Book End[26] is a crossroads for users to decide on where to go. It resembles the location that has been displayed in various Ever After High episodes and is a shopping villa of sorts. So far, only two shops are available, although judging by the faded background, it is plausible that there will be more to come.

The Book End Boutique[27] is a feature available only to those who enroll on the site, and it's a program that allows members to shop and browse for clothing and other attire for their virtual character. The available outfits are inspired by the clothes worn by characters in the cartoon, including everyday wear, Legacy Day, Getting Fairest, Thronecoming and Spring Unsprung items. Known glitches in the boutique are that occasionally it may say that you bought something even though your wealth doesn't change, and sometimes you don't receive an item you purchased. Sometimes multiples of one garment appear in your closet, which of course, is unnecessary.

Throne Furnishings[28] is a shop for users of the Ever After High site to go to in order to purchase virtual furniture for their dorm rooms. Naturally, things are a bit more expensive at this store, and quite a few items are only able to be bought with gems. Like the rest of the other buyable items, they all seem to be themed around the first four characters of the series.

The The Vault section[30] was launched on May 30, 2013. It represents the Vault of Lost Tales beneath Ever After High and contains a series of wallpapers and a preview of the Ever After High theme song, in addition to a free download of the full theme song.

Retrieved from "https://ever-after-high.fandom.com/wiki/Ever_After_High_(website)?oldid=4341"
Community content is available under CC-BY-SA unless otherwise noted.