Ever After High is a franchise owned, developed, and promoted by Mattel. It follows from the success of the company's 2010-launched Monster High and works according to a media franchise model very similar to its predecessor.

Marketing of the new franchise technically began on December 19, 2012, although it was not recognized as such back then. As part of the new year events of Monster High, the Boo Year's Eve Countdown Calendar was released. The December 19 entry belongs to C.A. Cupid, a character introduced to Monster High in Late 2011. The entry's exact words are "I want to continue to help others navigate the thrills and chills of love in 2013--not just at Monster High but around the world. By branching out, I scream of learning more about myself! Where do you want to go in 2013?" On April 23, 2013, this was followed up by an in-fiction announcement of C.A. during On the Air with C.A. Cupid that she would be "starting a new chapter in an enchanting place where [she] can help others follow their true heart's desires. The radio show is going on break while [she packs her] stuff and [gets ready for her] clawesome new adventure." Along with this announcement came the reveals of three websites: Village of Book End, Rewrite Destiny, and Royal or Rebel. Due to a sound file ripped from the websites, it was early on understood that the websites were related to the Ever After High trademark.

Mattel's expertise and market lies in the toy industry, and to make Ever After High a multimedia success, companies with complementing expertise and a foot or two in other interesting markets have been approached for partnerships or supporting functions. 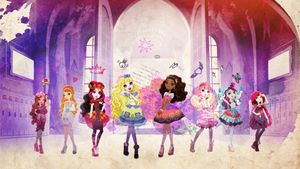 Ever After High currently has four sources of fiction: the cartoon, the books, the website, and the profiles. So far, the four pieces of fiction fit in one continuity, though small contradictions exist here and there. It is expected that over time, the four's timelines will grow further apart.

Ever After High takes place in an alternative universe where fairytale figures are real, in the sense that they exist but are aware of their status as characters in a story. In the world of Ever After High, the continued existence of these figures depends on the preservation of the story. And the preservation of the story depends on the figures' ability to provide new figures, their children, who will relive the story. As such, each child has their destiny already laid out before them the day they are born. For some, this is a beneficial situation, while others can only look forward to a gloomy future.

Ever After High is a high school founded in 1812 where the children gather not only to follow classes, but also to be prepared for their destiny. Every aspect of the school is designed so as to push the children in the proper direction. Ever After High is managed by Headmaster Milton Grimm, who has no regard for the students with less fortunate destinies except for their obligation to fulfill their destiny. He has a brother, Giles Grimm, who does not agree with Headmaster Grimm's beliefs and promotes choice through what few channels he has. Giles Grimm is the keeper of the Vault of Lost Tales, a secret library underneath Ever After High. Supposedly, he has knowledge of the fates of tales that ceased to exist that makes him more certain of the possibility of change.

At Ever After High, the student body has split in two sides: the Royals and the Rebels. The Royals are generally those with a luxurious destiny, and who thus are eager to obtain their much-promised Happily Ever After. The Rebels, on the other hand, are generally those with a negative or inconsequential destiny, and who thus are interested in the idea that their futures would not depend on destiny. The main figures within this conflict are Apple White, the future Snow White, and Raven Queen, the future Evil Queen. Raven's open rejection of her destiny is at the start of the conflict, while Apple White is tasked by Headmaster Grimm to convince Raven that her ideas are wrong. All the while, the two are roommates with an uneasy friendship going on between them and many friends who are all affected by the conflict in their own way.

To finish up the theme of Royal vs Rebel, there are two narrators present in the world of Ever After High, one female, one male. The female one sympathizes with the Royals, while the male one favors the Rebels' argument. The two bicker a lot, much to the annoyance of Madeline Hatter, who can hear and speak with them.

Three Ever After High product types are available or will be available very soon. They are dolls, currently sold at Justice, Toys "R" Us, Target, Walmart, and other major retailers, along with books, and other merchandise.

Retrieved from "https://ever-after-high.fandom.com/wiki/Ever_After_High_(franchise)?oldid=4139"
Community content is available under CC-BY-SA unless otherwise noted.