C.A. Cupid, fully named Chariclo Arganthone Cupid, is a 2013-introduced and all-around character. She is not a part of a fairytale like most of her fellow students at Ever After High, but is part of Ancient Greek mythology. In the destiny conflict, she is on the Rebel side because she considers destiny to get in the way of the flow of love. Prior to her arrival at Ever After High, she was home schooled and spent her first public school years at Monster High. Because she was abandoned at her adoptive family's doorstep, she does not know who her biological family is and is in search of her origins. As a supporter of love, Cupid does everything within her power to bring people together. Though she is terrible at archery, she is pretty good at giving love advice and thus hosts a MirrorCast advice show to help others find love.

In English, she is voiced by Erin Fitzgerald.

Cupid is kind and helpful in matters of love. While she's very much career-driven, she can be distracted from her work when she is near her crush. However as she's aware that she's a student with a unique-type destiny, she's still searching for her family heritage.[1]

Cupid has long, wavy pink hair accentuated with white strands. She has pale skin, blue eyes, and ivory feathered wings. She dresses in shades of pink, as well as white, black, and gold. Her choice of apparel is Ancient Greek-based, but adjusted to incorporate more modern elements. Her overall look is finalized with heart, arrow, and feather symbols. 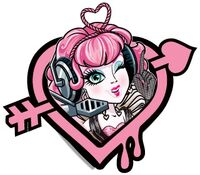 Cupid joined the world of Monster High in Late 2011 and was involved in a few stories up until Early 2013. On December 19, 2012, as part of the new year events of Monster High, Cupid's entry of the Boo Year's Eve Countdown Calendar was released. The entry's exact words are "I want to continue to help others navigate the thrills and chills of love in 2013--not just at Monster High but around the world. By branching out, I scream of learning more about myself! Where do you want to go in 2013?" On April 23, 2013, this was followed up by an announcement of C.A. during On the Air with C.A. Cupid that she would be "starting a new chapter in an enchanting place where [she] can help others follow their true heart's desires. The radio show is going on break while [she packs her] stuff and [gets ready for her] clawesome new adventure."

In Monster High, C.A. is an elemental, most likely a bone one. This is why she's white with charred-looking hands and feet and ribcage wings. In Ever After High, C.A. has taken on a human appearance. Her skin has become mono-colored and her wings are feathered. Her personality has also undergone a change. She still does her work by radio and actively pursues her own love story, even if at the cost of another's, while Cupid in Monster High took joy out of bringing people together and had peace with the fact most boys were romantically intimidated by her.

C.A. Cupid was left on the doorstep of Eros's temple as a baby. Why her biological parents did this, provided they were the ones to do it, and who they were is unknown. C.A. was adopted by Eros, the god of love in Greek mythology, but better known by his Roman name, Cupid. He taught her the family business and gave her wings. In her diary she mentions that she has step-siblings.[2]

Cupid considers herself closely knit with anyone who has an open heart. One notable friend of hers is Dexter Charming, who is a good listener and vice-versa. The two of them hang out together a lot.

Cupid has no pet because she can't choose one.[2] In The Storybook of Legends however, when the students must call an animal companion to them, a Pegasus named Philia comes to Cupid.

Cupid has a big crush on Dexter Charming, but he is unaware. Even though it saddens her, she helps him express his feelings for Raven Queen.

Community content is available under CC-BY-SA unless otherwise noted.
Advertisement