Start a Wiki
Ashlynn Ella is a 2013-introduced and all-around character. She is part of Cinderella as the next Cinderella, and she is a student at Ever After High. In the destiny conflict, she is on the Royal side out of a general belief that destiny is the way to go. However, she has been wavering towards the Rebel side ever since she fell in love with Hunter Huntsman, who won't be part of her future if she follows her destiny. The two of them uniquely share an affinity for nature and animals in particular, putting them at ease when they are together. An interest exclusively pursued by Ashlynn is her love for shoes, which she inherited from her mother. She runs The Glass Slipper shoe store in the Village of Book End after school for this reason.

She was voiced by Laura Bailey from Chapter 1 to 2, and by Karen Strassman since Chapter 3, in the English version.

Ashlynn's interests are divided over three topics: shoes, nature, and Hunter Huntsman. She holds a job at The Glass Slipper both to indulge her obsession and to enforce the humble, hard-working attitude her mother instilled in her. Ashlynn enjoys long strolls in Enchanted Forest and getting her hands dirty with earth and plant material, even if it is not befitting one of royal heritage. She has a unique ability to communicate with animals, who help her out sometimes. She shares this interest with Hunter, whom she dates despite not being allowed to, to the mixed feelings of the other students.

Ashlynn has long strawberry blonde hair pulled into a pumpkin-shaped bump and tied with a braid. She has green eyes, peach skin, and natural pink lips. Her theme colors are turquoise and coral pink. Ashlynn enjoys combining floral color or patterns to her outfit, as this shows that she's a nature enthusiast. 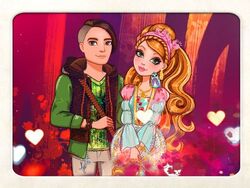 Ashlynn is the daughter of Cinderella and her husband, a king. Her story reveals that she has at least one aunt whom she calls Auntie Step, likely one of the evil step-librarians. In "Ashlynn's Fashion Frolic", it is revealed she has two evil step-sisters as well.

Ashlynn is easy-going and considerate, resulting in her having many friends and acquaintances both human and animal. Nonetheless, she only considers herself to have a deep connection with Hunter, the first person to truly share her interests in the outdoors.

Ashlynn is dating Hunter Huntsman, despite knowing that this is not approved of and that they may be endangering their stories. They once dated secretly, but after Duchess Swan found out, they revealed themselves to the school. Ashlynn broke up with Hunter because of the peer pressure she was facing, but eventually decided that he was more important than her status as a Royal.

Retrieved from "https://ever-after-high.fandom.com/wiki/Ashlynn_Ella?oldid=4292"
Community content is available under CC-BY-SA unless otherwise noted.